The History of Eyebrow Tattooing 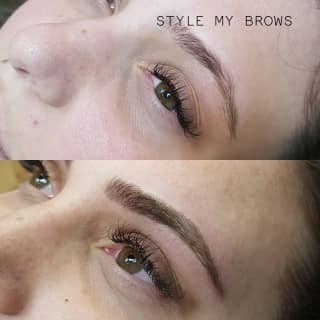 It seems that ‘modern’ tattooing has its origins in the Polynesian islands. One story talks about conjoined twins born on the island of Ta’u, Samoa, who were separated accidentally by the prow of a canoe. They landed in Fiji, where they learned the art of tattooing. The twins eventually returned to their native Samoa and one of them, Taema, became a tattooist and a teacher of the art.

In Samoan, the word tatau means “appropriate, balanced and fitting”. This is a perfect explanation of what we aim to achieve with the semi-permanent eyebrow tattooing today.

Eventually, the art of tattooing spread to other Pacific islands, including New Zealand. We often see the familiar and beautiful Maori tattoos.

But tattooing goes back much further than this. When mummies of ancient Egyptian rulers and priests were removed from their tombs, they were found to have intricate tattoos. Cleopatra herself had exquisite ‘permanent makeup’. Many of the Egyptian tattoos were of symbols that had special meaning to them.

Archaeologists have also found the ancient mummified body of a Sudanese woman with a Christian symbol tattooed on her thigh, showing that tattooing was practised in northern Africa around 2000 years ago.

All of the ‘ancient’ tattooing practices (and many modern ones) produce permanent tattoos. Modern eyebrow tattooing, also known as Microblading or eyebrow feathering, produces a semi-permanent result that can be renewed every few years or allowed to gradually fade.

Unlike the placing of pigments deep into the lower layers of the skin as in ‘normal’ tattooing, eyebrow tattooing uses a microblade – a fine blade consisting of a line of tiny needles – which is dipped in pigment and then gently stroked across the skin to ‘create’ fine hairs that resemble the person’s own eyebrows. It can be used to fill in thin eyebrows, extend or thicken existing eyebrows or ‘create’ eyebrows lost through disease or over-plucking. The pigments used can be natural plant-based, or synthetic.

At Style My Brows we offer both natural and synthetic pigments for you to choose from. The shape of the brows is designed very much in consultation with each client, with input from using the ‘golden section’, an ancient tool for creating pleasing and classical proportions, also found in nature in the shape of shells and flowers. We also offer brow shaping with wax and tint, lash lifting and tint, lip waxing and chin waxing. For me personally, as I came to the end of my twenties, the end of my eyebrows decided to disappear too. My face was looking a little less vibrant. I chalked it up to age and got on with things until I read an article on the ‘Importance of Eyebrows’. I had always been the artistic friend who perfected my friends’ eyebrows and lashes, neglecting my own! Eyebrows have the ability to change your face wonderfully, dramatically. Many people are dubbing Microblading the mini-facelift. Upon discovery of this brow information, I went directly to my nearest makeup counter and purchased a brow pencil, brow powder and brow stencils for myself. Armed with all the goodies to transform my brows, I marched home to fix my brow situation. I was in love with the results: it made my eyes pop and I felt younger. Addiction activated!

However, let me tell you now, drawing on perfect brows day after day got tedious. Especially for a person like me who has half her brows missing!

Good brows take a lot of time in front of the mirror each day and I’m quite lazy when it comes to self-pampering. After all that brow tweaking in the mornings, they frequently didn’t quite last the day through.

Clearly I was over it, so I went in search of a solution. I had heard of Eyebrow Tattooing that left you with a rather solid looking pair of brows. It sounded a little too permanent for me. I didn’t want that; it suits some people but not me. I then discovered Microblading – I was in LOVE. I did my research and booked in as soon as possible. It changed my face completely: the arch could be raised in a much more defined way than brow powders and pencils ever let me. I kept getting compliments like ‘you look good’. They were my brows and nobody could tell!

Brows quickly became my obsession. I googled and read books and blogs on brows until I was absolutely adamant I had to help other people re-create their brows. This was not going to be just for my friends – I wanted to go public!

I was enchanted by the before-and-afters. I needed to be a part of the Brow Gurus of Melbourne changing faces!

I bit the bullet and drained the bank account and not only completed one training course but THREE! That’s right, three separate training courses on Eyebrow Tattooing. I researched pigments, blades and trade secrets until 3am each night, until I found the best.

After my last training at the Holo Academy, I felt armed with all the right tools I was finally ready after a year of training and practising – I the perfectionist, was ready to start giving people their dream brows. And what an honour it is to do what I love every day! I’m obsessed with Brows; I love being able to see my clients’ faces when they look at their brow transformation for the first time. So I opened the doors to STYLE MY BROWS. Welcome to my page and my little business that I care so much about. I will do my very best to give you your dream brows, whether it be Shaping and Tinting or Microblading. So, I look forward to creating brows for you & meeting you all. xx